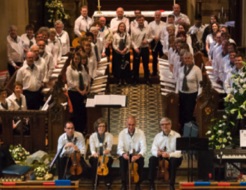 The Colchester choir was formed in the late 1990s, and has performed at a number of events in the Colchester area and beyond. The choir has produced inter-church services for Seeking God's Blessing for Colchester, and presented the launch conert for John Pantry's God of the Empty Space. On Good Friday 2011 the choir provided the music for Treasures of Darkness, a reflection in words, music and drama at the Mercury Theatre, Colchester. The choir has sung at events in Ipswich, Harwich, Bradwell-on-Sea, and Southend-on-Sea, and at two Pilgrimage of Song events in Essex. It has also been involved in a number of Taize workshops and services.

The Ipswich choir was formed in 2014, initially to take part in Prom Praise at the Royal Albert Hall. Since then the choir has presented Crimson Glory - a commemoration of the First World War - and Palms and Thorns - a reflective servioce for Palm Sunday. In addition the choir has been involved in workshops and a Pilgrimage of Song.

The Bury choir was formed in 2018, initially to take part in Crimson Glory at St Edmundbsury Cathedral.

All choirs meet on an occasional basis, with rehearsals spread around different days of the week, for a few weeks leading up to each event. Members sometimes sing in both choirs.

The Ipswich and Bury choirs are directed by Richard Hubbard. Richard is Music Development Director at St Edmundsbury Cathedral, heading up the InHarmony project to enrich and enable music in worship in churches across Suffolk. He is also a Lecturer in Music and Worship at London School of Theology, where he directs the chamber choir VivaVoce.

The Colchester choir is currently seeking a new permanent director.

Rehearsals are relaxed and friendly, and include time for coffee and a chat. New singers are always welcome in all choirs.

The Chamber Choir is a recent development. Based in Ipswich, it is made up of singers from the two main choirs who are confident sight-readers and with experience of singing a capella. The choir is directed by Andrew Gosden, a local musician with many years' experience in choir and church music directing. Like the main choirs, the Chamber Choir meets on an occasional basis. So far it has led music at workshops in conjunction with St Edmundsbury Cathedral's InHarmony project.

"What a joy and a privilege to sing in Cantus Firmus under Richard's direction".

"I enjoy the mix of hard graft combined with Christian fellowship at rehearsals".

"I couldn't think of a better choir to sing Christian music with".

"The Christian fellowship is something you do not get in other choirs. I always come away feeling uplifted."